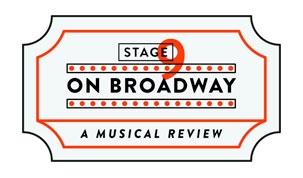 Hutchinson, Kan. – Stage 9 is pleased to announce an exciting change to our 2017 Season.  Our production of Time Stands Still originally scheduled for February 23-26 and March 2-5 has been replaced by our very first musical review, Stage 9: On Broadway!  There will be three performances only for this exciting production, Friday–Sunday, March 3-5, 2017.

A cast of Hutchinson's finest musical theatre talent celebrates the American musical theatre through an eclectic collection of show-stoppers from the 1940s to present day.  Some of the musicals which will be featured include Smokey Joe's Cafe, Rent, You're a Good Man, Charlie Brown, The Music Man, Pippin, Fiddler on the Roof, A Gentleman's Guide to Love and Murder, A Little Night Music and Wicked.  The review will feature the vocal talents of Hutchinson favorites Amy Bretz, Robert Calhoun, Amy Frederick, Jordan Gajewski, Lynn Hase, Piper Harding, Paula Rothe and Seth Stavy.  On piano, Rochelle Calhoun will lead our live combo.

The entire line-up of Broadway selections will include the following:

On Broadway, Smokey Joe's Café
Fugue for the Tin Horn, Guys and Dolls
Sing for Your Supper, Boys from Syracuse
Almost Like Being in Love, Brigadoon
Never Say No, The Fantasticks
I Could Have Danced All Night, My Fair Lady
Ya Got Trouble, Music Man
Ohio, Wonderful Town
Together, Wherever We go Gypsy
The Impossible Dream (The Quest), Man of La Mancha
Heart, Damn Yankees
Do You Love Me?, Fiddler on the Roof
The Book Report, You're a Good Man, Charlie Brown
Seasons of Love, Rent
I Remember it Well, Gigi
I Miss the Mountains, Next to Normal
No Time At All, Pippin
Agony, Into the Woods
What I Did for Love, A Chorus Line
I've Decided to Marry You, A Gentleman's Guide to Love and Murder
Therapy, Tick, Tick….Boom!
Stars and the Moon, Songs for a New World
Being Alive, Company
Unworthy of Your Love, Assassins
Send in the Clowns, A Little Night Music
For Good, Wicked
Louder than Words, Tick, Tick….Boom!

Stage 9:  On Broadway!  is performed on Friday and Saturday, March 3-4, 2017 at 7:30 p.m. and Sunday, March 5, 2017 at 2.00 p.m. Ticket prices for this review are $12 for adults, $10 for seniors, and $8 for ages 8-14. Patrons must be 8 years of age to attend productions at Stage 9. Stage 9 Members who possess play coupons for Time Stands Still will be honored for Stage 9: On Broadway!  Members should follow the instructions on the back of their coupons to redeem them for tickets to On Broadway!  Members may also choose to use their coupons for any other play (The Odd Couple [Female Version], The Laramie Project or Almost, Maine) throughout the year.

Tickets are now available online and at Apron Strings.  Tickets will also be sold at the Box Office one hour prior to each performance.  However, Stage 9 encourages patrons to purchase tickets in advance.  There are only 85 seats available at each performance and with the amazing talent assembled for this special production, the review is expected to sell out each performance.

Selections from Stage 9: On Broadway! are performed with special permission from Rodger’s and Hammerstein Music Library: An Imagem Company and in partnership with licensing agreements with ASCAP, BMI and SESAC.

For more information about Stage 9: On Broadway!, auditions or to schedule interviews with the director, contact Charles Johnston at 646-628-4353 or charles@stage9hutch.com.