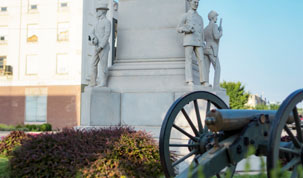 The Soldiers and Sailors Memorial is a Civil War Memorial in the middle of First Avenue in Downtown Hutchinson. This iconic memorial stands tall as a tribute to those who selflessly gave their lives in the pursuit of liberty. It is a Grand Army of Republic commemorative monument, and one of only three multi-figure memorials in Kansas, combining a statue of Abraham Lincoln with statues of a sailor, an artilleryman, an infantryman and a cavalryman who represent the four branches of the Union Army. Even more significant though, is that the cannons flanking the monument are actually from the Confederate Army. One of the cannons is one of only eight remaining.