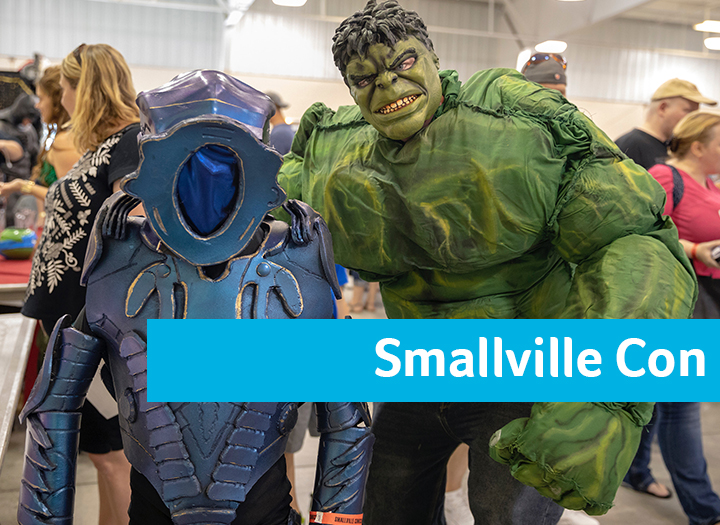 Brandon Routh: Brandon Routh soared into the media limelight in 2005 when he was cast as “The Man of Steel” in director Bryan Singer’s highly anticipated revival of the original superhero film franchise “Superman Returns.” He currently stars on the CW as “Ray Palmer/The Atom” in the DC Comics super-team series “Legends of Tomorrow.” In 2015, he starred opposite fellow "Legends of Tomorrow" cast member, Caity Lotz, in the sci-fi thriller “400 Days.” For more information on Brandon and Smallville Con, click HERE!

Richard Brake: Richard Brake is a Welsh-American character actor, known for portraying Joe Chill in Batman Begins (2005), Doom-Head in 31 (2016), and the Night King in the fourth and fifth season of Game of Thrones. Brake was born in Ystrad Mynach, Hengoed and in 1967, he and his family migrated to the United States, where they first settled in Atlanta. He then grew up in the states of North Carolina, Tennessee, and Ohio, attending the Western Reserve Academy in Hudson. Brake studied acting under Sam Kogan, at his Academy of the Science of Acting and Directing in London, and Beatrice Straight, at the Michael Chekhov Studio in New York City. For his full filmography and for more information about Smallville Con, click HERE!

Judith Hoag: Judith Hoag is an American actress. She is best known for portraying April O'Neil in the first Teenage Mutant Ninja Turtles film in 1990, and as Gwen Cromwell Piper in the Disney Channel Halloweentown television films series. She is also known for her role as Tandy Hampton in the ABC drama series Nashville, Flying By (2009), I Am Number Four (2011) and Hitchcock (2012). She also appeared in the film Armageddon (1998). For more information on Judith and Smallville Con, click HERE!

Danny Woodburn: Danny Woodburn is an entertainer on stage, film, television, and the comedy club circuit. Danny achieved prominence on NBC's sitcom Seinfeld (1989), performing the role of Mickey Abbott, the volatile but lovable friend of Kramer. Since his first appearance on the show in 1994 he has gained speed as an actor and garnered respect from industry professionals. His character on Seinfeld was an important role for him, in the sense that the writing and portrayal of Mickey is positive and non-stereotypical. Danny has raised awareness of the continued derogatory and dehumanizing treatment of Little People in society and the media. For more information on Danny and Smallville Con, click HERE!

Claudia Christian: Claudia Christian has been in the film and television business as a performer for over 30 years. She has starred in over 50 films and hundreds of hours of television. Sci -fi fans around the world know her from her work on the Hugo award winning show Babylon 5 where she portrayed the complex Commander Susan Ivanova. She is the author of two autobiographical books; “My Life with Freaks and Geeks”(2010) and “Babylon Confidential” (2012) and the sci-fi novel “Wolf’s Empire” (2016). For more information on Claudia and Smallville Con, click HERE!

Miah Kane: Miah grew up in Hutchinson, KS before relocating to Arizona at the age of 17. Over the next decade, he played in various bands such as world-renowned industrial metal band Blessedbethyname with his two brothers Madio and Sage (also Hutchinson natives). Music has always been a passion and a heavy influence in his life. Having the opportunity to pursue music for several years was like a dream come true. Shortly after the band broke up he would discover a new passion and love for acting. To read more about his journey and where Miah is now (a series regular on the Discovery ID channel on shows such as Diabolical, Village of the Damned, and Street Justice: The Bronx), click HERE!

Stacy Haiduk: Stacy first achieved national fame when she was cast in the role of Lana Lang in the live-action Superboy TV series of 1988. Her next significant role was Lt. Cmdr. Katherine Hitchcock the chief engineer, and third in command of the high-tech submarine on SeaQuest DSV. Star Wars: The Old Republic Stacy portrays the no-nonsense Mandalorian bounty hunter Akaavi Spar, a companion to the "Smuggler" character in the gameplay. Guest star roles on television shows such as True Blood, Charmed, The X-Files, CSI: Miami, CSI: NY; Cold Case, Due South, Crossing Jordan, NCIS, Heroes, Prison Break, and Burn Notice. See more about Stacy on her website http://stacyhaiduk.info/ and meet Stacy at the show June 22-23! Discount advance passes on sale now along with more information about the show at www.smallvillecon.com.