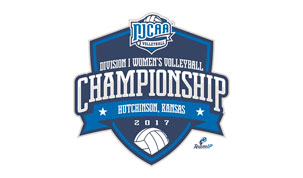 Hutchinson, KS- The Greater Hutchinson Convention/Visitors Bureau (CVB)—host of the NJCAA DI Volleyball Championship—today proudly unveiled the event’s official logo as well as announced the launch of the website and social media platforms for the championship, which will take place in Hutchinson, Kansas, November 16-18, 2017.

The primary logo was produced in partnership with the NJCAA and designed by Team IP, the official championship merchandise partner of the NJCAA.

The championship website was created by PrestoSports, the official website partner of the NJCAA, and can be viewed at www.njcaavb1.com. Social Media accounts (Twitter and Facebook, @NJCAAVB1) will be administered by the CVB leading up to and throughout the championship.

“The planning process began in earnest last fall, and this is an exciting step towards welcoming the NJCAA Division I Volleyball Championship to Hutchinson,” said Holly Leiker, the Championship Director and National Sports & Destination Sales Manager for the CVB.

The three-year contract for the Division I Volleyball Championship was awarded to the CVB by the NJCAA Board of Directors in April 2016. The 16-team, false double-elimination championship will take place at the newly-renovated Hutchinson Sports Arena. Teams will begin arriving in Hutchinson on Tuesday, November 14th and all teams will be in town by Wednesday for the official team practice day, as well as the evening player’s banquet scheduled to take place at the Cosmosphere.

“We are thrilled to have been awarded this championship event for the next three years, which will provide an annual economic impact of over $2 million to our community”, said LeAnn Cox, Vice President of Operations and Tourism for the CVB.

Advertising and sponsorship opportunities are being finalized and will be released in the coming weeks. The CVB is seeking volunteers in nearly 20 different areas of the championship. Interested individuals can fill out a volunteer application on the NJCAA Volleyball Championship website or contact the Greater Hutchinson CVB directly at 620.662.3391.

“We appreciate the support the Hutchinson community has shown the NJCAA over the years, and we look forward to another successful national championship event in the Hutchinson Sports Arena,” said Mary Ellen Leicht, Executive Director of the NJCAA.

The new logo, website and social media accounts are the property of the Greater Hutchinson CVB and the NJCAA, and use of any mark of the championship without written consent is prohibited.